I'm a bit late to the party, but here are the complete facts. ALL 9N, 2N, and early 8N Models til April, 1950, used the " ¡î " symbol in the serial number prefix and suffix. Before April, 1950 cylinder liners were made of steel and thus stamped with a STAR " ¡î " prefix and suffix. Post 1950 Ford, changed to cast iron sleeves and then switched to a DIAMOND " ¡ó " symbol. Nowadays it is a moot point since steel sleeves are no longer made, only cast iron. Also note that ALL 9N and 2N Models used the "9N" Model ID in the serial numbers -there were no '2N' stamped serial number codes.

Here¡¯s how it worked: Engine blocks were cast at the Rouge Plant without any serial numbers stamped; those came later. Blocks were set aside in a hold area to cure for 30 days. It¡¯s just the nature of the beast. Cast Iron requires a 30 day green period of which to cure otherwise it is too brittle to machine. It is similar to seasoning wood. If you cut green wood, it won¡¯t burn. It must be seasoned for a period before it will burn. The next step is to pull engine blocks that have cured at random from the hold area to the machining area. Engine blocks get fully machined, cleaned, and then set in another hold area, still unmarked. Next, blocks get pulled at random to the engine assembly area where they are fully assembled and sent to yet another hold area. Once assembled, engines get pulled at random to the QC Test Area where they are put on special machines to be fully tested for function and gone through a break-in period. If and only when the engine passes QC Inspection/Testing is it then given a hand stamped serial number and gone to another hold area at random, to then wait to be pulled for final assembly on the line. Serial numbers are stamped in sequential order, BUT they are not maintained in any particular sequential order. A functional, assembled QC approved engine was of no concern to staying in any particular order. If at QC Testing an engine failed, it was either sent to a repair shop and retested or if unusable, would be scrapped out. Its only purpose was to ID the engine block whose serial numbers were technically meant to ID the vehicle serial number. Since many blocks were swapped out, an 8N s/n engine block could have been switched out to a different 8N or even a 9N or 2N and vice versa. Note the date on this Service Bulletin. S/N¡¯s were used on all Ford engines, not just tractors. Also, the capital letter ¡®I¡¯ was used for the numeral ¡®1¡¯; the lower case letter ¡®b¡¯ was used for the numeral ¡®6¡¯ and the inverted ¡®b¡¯ was used for the numeral ¡®9¡¯. Before April, 1950 cylinder liners were made of steel and thus stamped with a STAR (*) prefix and suffix. Post 1950 Ford changed to cast iron sleeves and then changed to a DIAMOND (<>) symbol. However, in the case of casting code date tag bosses used to identify casting part numbers; date of pouring; and/or foundry trademarks, the numerals used are a different character font from the serial number hand stamps. They should be because the method used on casting date code tag bosses is different than the hand stamp method. The characters and numerals are raised on a bar/band prepared prior to casting and inserted with screws in the sand mold prior to pouring. Each day¡¯s production would have the same tag. It was how Ford could track green castings. My early s/n 1948 8N shows engine casting code as ¡°I167¡±. We know 8N production began in July, 1947, so a September 16, 1947 casting code would coincide. Bear in mind that cast iron requires about a thirty day "curing" period, sort of like "seasoning" wood, before it can be machined otherwise it is too brittle and can create problems with machinery such as broken tooling as well as scrap castings. That being said, don't assume because your engine casting code date boss shows September 16, 1947 your tractor was built on that date, it wasn't. Only the engine block was cast on that date. After cast iron parts were ¡®seasoned¡¯ for at least 30 days ¨Can inherent property of cast iron is it is brittle and requires 30 days curing before it can be machined ¨C then the part, engine block in this case, was machined, cleaned, assembled, then tested in the QC department, and if it passed testing, would now and only now get a serial number hand stamp, not before, not after. Good engines were sent to a hold area where they would be pulled at random and moved to the assembly line to be installed in the tractor. Engines that failed the testing were sent to another hold area to be further scrutinized as to why they failed and fixed if possible then back through the test procedure again. If unrepairable, they were scrapped out. 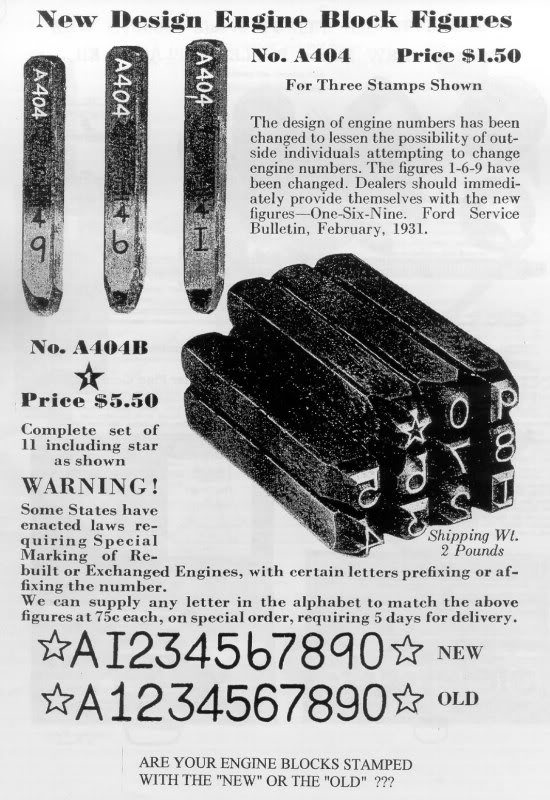 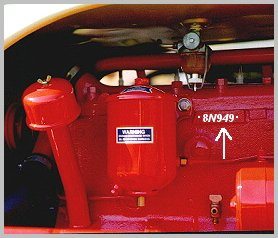 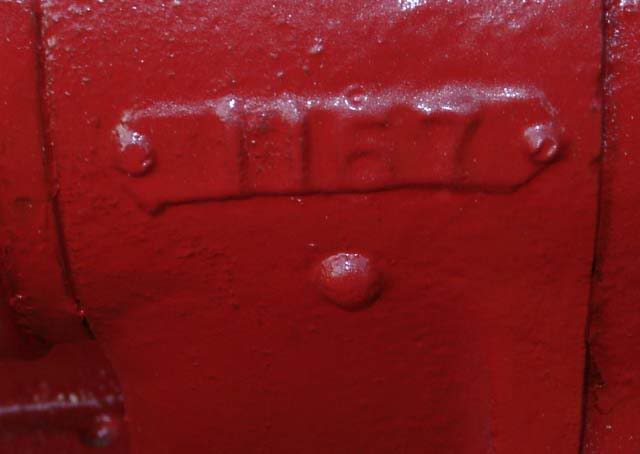 NOTE: Casting date codes do not use the hand stamps like engine serial numbers do -they are bands set up with standard cast raised alphabetical and numerical numbers and characters. They get riveted onto the block sand casting then poured. Each day gets the same date ID tag. The reason they coded the blocks is to track how long the cast blocks were held in 'green status'. Blocks were stored in a random manner. Cast Iron requires at least 30 days to 'cure' before it can be machined otherwise it is too brittle and will crumble and/or break tooling. It is an inherent property of cast iron. Equate it with the way wood has to be 'seasoned' before it can be burned efficiently. Green wood does not burn well.

Now, with all that being said, you can not put a whole lot into your engine serial number because many blocks were swapped out with one from a different tractor when one got damaged. It is more important to concentrate on the details of your machine than going by a serial number. Unless one has an early 9N or 8N model number, and you wish to restore it to all original, a s/n should not be used to judge criteria of model year. All 9N & 2N models had a few common details. They had a 3-Speed transmission; DRAFT control only; basic electrical system beginning with s/n 12500; front mount distributor; with steering being changed over the years a few times. The 8N was released in July, 1947 and now had a 4-SPD; POSITION CONTROL; better electrical system, and a better steering system to name a few changes. The MPC's (Master Parts Catalogs)show most all the changes over the model years. You really have to study part numbers and know what part prefix and suffix numbers and letters define to fully understand. 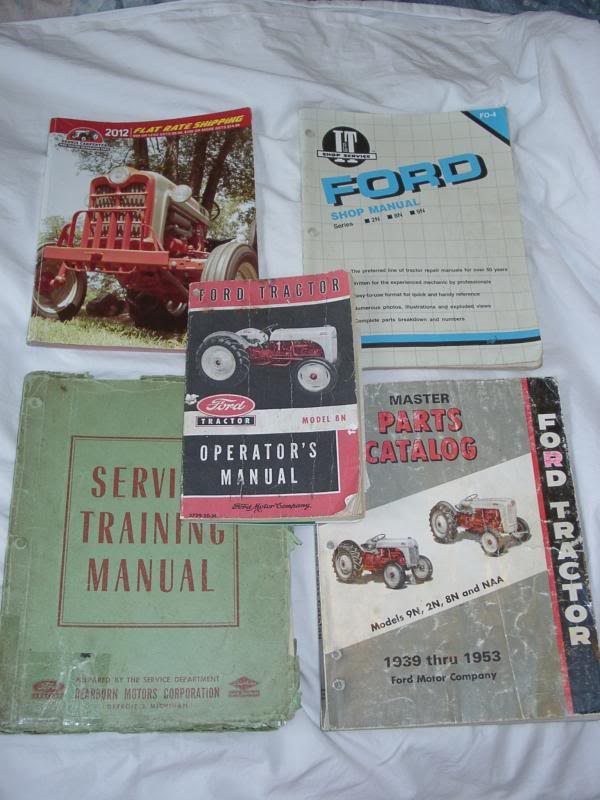 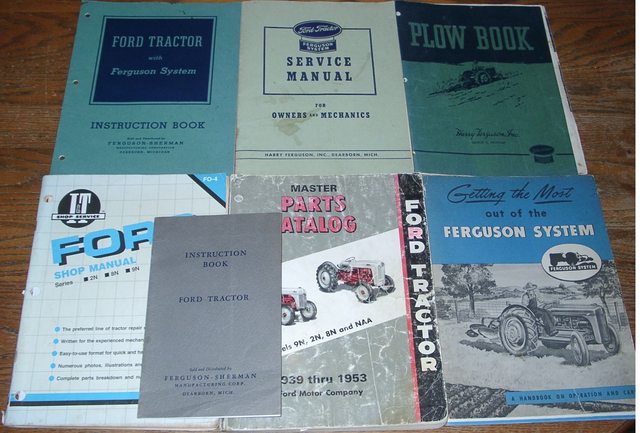